Why ROI? Why Now?

Well, that depends on your age and which generation you fall into, because your age will probably determine your perspective.

Grandparents will say "This reminds me of the old days."

Parents will say "When are things going to change back to the old days?"

Young adults will probably say "Things are depressing these days." 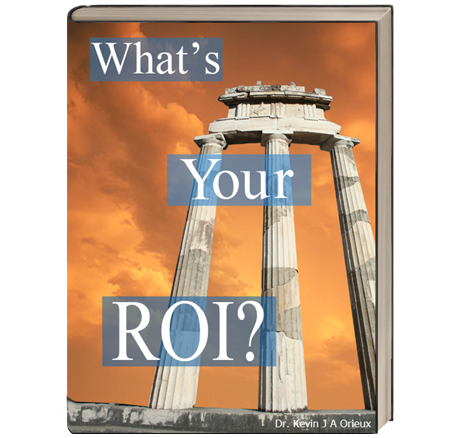 ROI for Grandparents
Because it's about passing on wisdom from the elders to the younger generations, because without the insight of that wisdom the younger generation seems to have difficulty seeing the sign of the times...
ROI for Parents
The simple answer is because I felt compelled to write the book.   As a parent of one young adult and two teens, I see my children entering a social culture and an economic climate that worries me...
ROI for teaching Teens
I thought it might be appropriate to explain the timeliness and the value of "What's Your ROI?" as a training tool for children, by virtue of using the age-old children's favourite.   A "knock-knock" joke...

Prediciton of What's Your ROI

Eli is in deep, and he's barely treading water.   As the newly appointed CEO of an international corporate merger between East and West, Eli is granted the opportunity to take the helm of the Western half of the equation, a nearly bankrupt American national manufacturing company with a century long history of surviving two World Wars, the Great Depression and numerous recessions.   His responsibility is to chart a course out of the wake of the storms that threaten the survival of ten thousand stateside employees, but economics are merely the outside enemy.   The real enemy is on the inside, and it lies within the hearts and minds of his own people.

The Eastern side of the merger is a family run Asian conglomerate, operated by a family leadership team, three generations deep, whose overseer is an eighty year-old patriarch.   The Asian empire was built on a foundation of teaching ancient principles; central to this training is being able to understand how to stem the tide of conflict arising from interpersonal relationships.   The patriarch has mentored his successors from decades of personal experience, coupled to the wealth of wisdom he has inherited from the generational stream flowing from his ancestors.   Foreseeing that forces of globalization will make a merger with the West inevitable, the patriarch sent his grandson, Eli, to America for training in the nation's best business schools to compliment the lifetime of mentorship this young man inherited from the wisdom of his granfather's training.

As the only executive member of this newly merged company who is fluent in both Eastern and Western ways, Eli is given the responsibility to eradicate conflict, competition and complacency in order to create a unified worforce to avoid outsourcing ten thousand jobs to Asian soil.   In this strategy to translate Eastern wisdom with Western mindsets he creates a mentorship group of his own with ten young adults, whose resistance this leadership spans the spectrum of mockery all the way to mutiny.   If Eli can unravel the various dysfunctional mindsets of these ten young people, he believes he can find the key to salvaging the jobs as well as the lifestyles of the entire American workforce.   What's a risk is more than just his grandfather's legacy and reputation, but his own.

Dr. Orieux is a rare commodity in corporate training, in that his focus is truly about getting EVERYONE to get along.   I have attended countless training seminars over the years where the trainer is heavily tainted by managerial nepotism, which is futile because you’ll never get employees to buy into any training that devalues the contribution of the subordinates.   I have never seen a corporate model for synergy as balanced as what Dr. Orieux and his associates at Aararat have, presenting the needs of the company, as well as, the needs of the workers, without favoring one at the expense of the other.   No wonder our employees walked away just as inspired and motivated as our managers.

As a senior administrator, I’ve taken management courses for almost 25 years, so when my boss (who’d taken training with Dr. Orieux before) said we’d learn a lot, I was very sceptical.   Was I ever wrong!   What really impressed me the most was how much Dr. Orieux obviously respects his employees and goes out of his way to help them realize how valuable they are to his company, and how much he appreciates them.   His training has helped me to see that my boss has this same kind of heart.

I couldn’t have imagined how much our team could become so united in just three days.   Our resolve for synergy has become fortified because Dr. Orieux presented a model for team-building that we all believe we can achieve.   He inspired us to believe in ourselves.

Dr. Kevin Orieux is one of the rare breed in the realm of corporate psychology who not only researches and writes on the subject, but has a track record of success with his own business endeavours. As a corporate trainer, keynote speaker and conference guest lecturer, he doesn’t just talk the talk, he walks the walk.

We'd love to hear from you! Please email us if you have any questions.